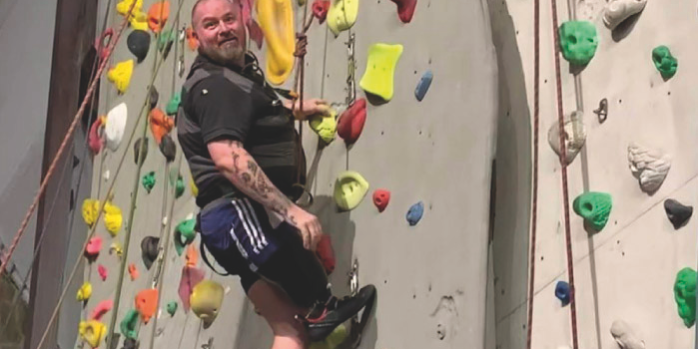 A grant from the Trust will help more people with dis- abilities to enjoy climbing, both indoors and out.

The £2000 award was made to the Scottish Paraclimb- ing Club, founded in late 2017 and based at the Edin- burgh International Climbing Arena at Ratho.

The club has grown quickly in its first two years, and now has over 20 climbers with varying disabilities and a number of club volunteers who give invaluable support. The grant will help the club cater for more severely disabled climbers, and to expand their out- door climbing trips.

Much of the money will be used to buy specialist climbing equipment that can be used by, for example, wheelchair users and paralysis sufferers. It includes harnesses, pulleys and arrest devices, and the training for volunteers in using them.

The club has regular Thursday evening sessions at Ratho, but also runs trips to crags including North Berwick Law, Blackford Quarry and Benny Beg near Auchterarder. Indoor walls visited include Edinburgh’s alien rock and Perth Climbing Wall. The new equip- ment will be a great help to this side of its work, both indoors and out.

Keith Lynch is the founder and president of the paraclimbing club, the first of its kind in the UK. His own climbing started about 7 years ago, following a serious accident which left him wheelchair-bound for some time and then led to an amputation. His new interest led to a spell as a member of the GB Para- Climbing Team.

Keith and the club are delighted at the boost the grant will give to the club’s reach. They enjoy support not just from other grant-givers, but from adventure cameraman and filmographer Keith Partridge. You can see his take on paraclimbing at http://www.youtube.com/watch?v=KPLrQhbnCZM For more information see: