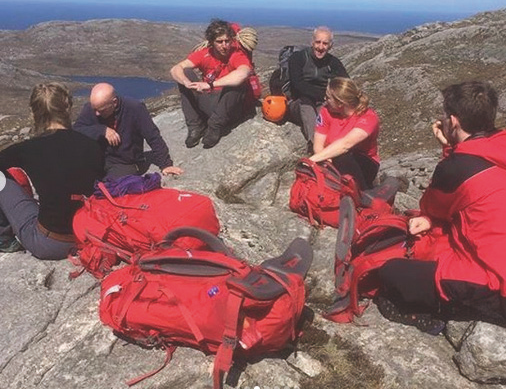 Hebrides Mountain Rescue Team has probably the biggest territory of any team in Scotland; all the way from Mingulay to the Butt of Lewis. What it hasn’t had up to now is a permanent base. A grant of £8,000 from the Trust has brought that a step nearer.

A site in Ravens Lane in Stornoway became available in 2018, and the SMT grant covered about half the acquisition costs. The team is now working towards funding a purpose-built HQ, which they’ll use for vehicle and equipment storage, an operation command centre and training.

The team dates from 2010, when a ‘Hebrides Search and Rescue’ team was set up. It was much in demand in 2013’s snowy winter, helping medical staff and supplies to get through. Team members (there are currently more than 20) have trained and practised hard since then, and in 2017 they became ‘Hebrides MRT’ and moved into their first rented team building (having worked from shipping containers before).

Team leader Charlie Greenwood reports that summer 2019 was quieter than expected, maybe because the climbers and walkers that make it to the Western Isles tend to be a capable bunch. Still, he expects that the surge in adventure tourism will bring more callouts, and is aiming to push team numbers up to 30-35, and to build skill levels. In quieter times the team is able to respond to more varied calls for help – in particular from the owners of cragfast sheep.

Looking well ahead, the team takes every chance to engage with young people on the islands; aiming, as Charlie says, not just to build awareness of outdoor risks, but “to tell them what a fantastic place they live in!”.

Mountain rescue support is one of the principal objects of the Trust.

To support and find out more about the Hebrides